The Joy of Ditch Day

I’ve been visiting my friend Avikar these past two weeks at Caltech, hanging out, working on a project, eating lots of food and boba, as well as trying alcoholic boba for the first time. It turns out that I also arrived in time for one of Caltech’s yearly traditions: Ditch Day.

The lore surrounding Ditch Day is that many years ago, the seniors would all band together and pick a day to skip school. The administration didn’t like that, and so over time Ditch Day morphed into it’s modern variant: seniors form groups and make what are called ‘stacks’, or puzzles and activities for the juniors, sophomores, and freshmen to compete in. Ditch Day begins at 8am, when the seniors, with no prior warning given, march around the dorms screaming “WAKE UP FROSH, IT’S DITCH DAY!!!” - and the like. It usually lasts till lunchtime, with some other fun off campus activity, like go-karting or going to the beach, taking up the afternoon.

I was given the great honor of being allowed to participate in this year’s ditch day, as if I were a real Caltech student. It was a bunch of fun, so I wanted to share my experience!

After being awoken at 8 (in the aggressive manner previously mentioned), you walk around the dorms and try to find the stack signup sheets. Our choices this year were the Fast and Furious stack, or the It’s Always Sunny in Philadelphia stack. Avikar and I selected the Fast and Furious stack, as it seemed to be the only one with extra space. There are four teams in each stack, it doesn’t matter which one you’re on. We were on team Letty. 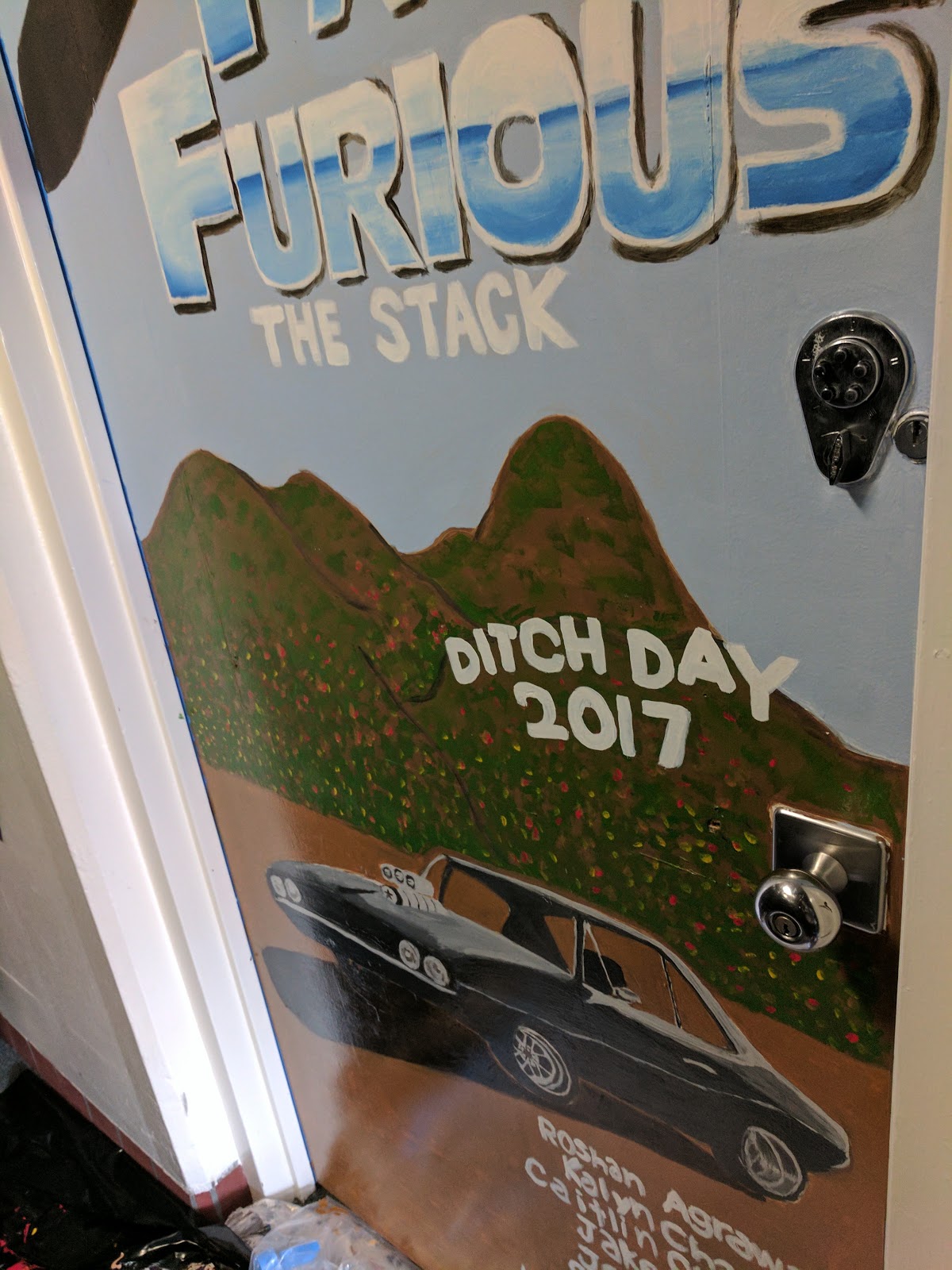 From there it’s breakfast.

Then, you get to open your first clue. Avikar and I were on a team with four others, all freshmen. We convened in one of their rooms and read our clue:

Actually that was the intro letter. Here is the first clue:

Plugging all the locations into google maps gave us a bunch of different airports. We tried constructing a word with the first letter of the country, city, and airport of each of the locations, but none of those worked. A senior came over and gave us a hint to subtract the time zones from a single letter. The letter L in London was bolded, so from there it was just a simple python one liner:

We had also been given a cardboard car that fit two people that we were told we had to bring with us and have at least one person in at all times. I wish I had a picture of it - it was quite fun to run around in.

Upon arriving at brown gym we a treated to the site of a giant rush hour board, made from cardboard boxes. We had to compete against another team, trying to solve as many rush hour puzzles in a half hour on the giant board as we could. We arrive before the other team, having figured out the clue first, and so get to study the first layout before they arrive, giving us a head start on the first puzzle. 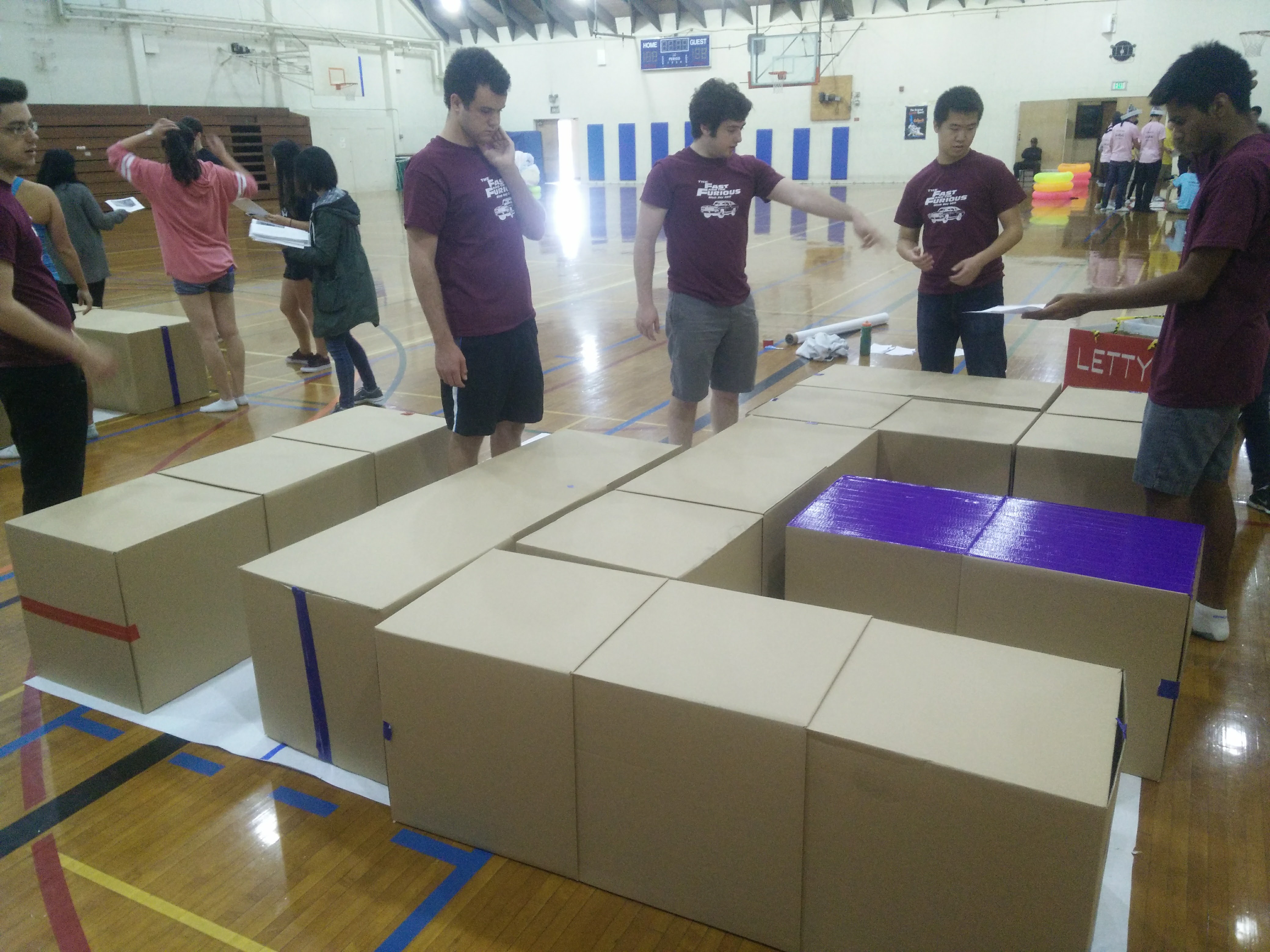 The other team arrived, and we were off to the races. We stayed ahead for a little, but then we got a super hard one that required 30+ moves to solve. The seniors let us put it into an online solver, since they said it was an accident we got that one, but it still set us back. We ended up tying; 15 to 15. Oh well. We were then given our next clue:

All of the phrases corresponded to a word with a length of the number in the parentheses:

And the clue’s title is ‘Silence is Key’. So silence is the key. So the silent letter in each word forms the answer.

Is DNA?OOL, which the Caltech students immediately realized was DNA POOL, or the Gene pool, on campus.

We raced over there in our cardboard car.

Upon arriving, we see a giant connect four board at one end of the pool, and two surfboards at the other end. We are told that this time we are having a relay race. We have to paddle the surfboards down to the end of the gene pool, put in a connect four piece, and then paddle back to hand off the board to the next teammate. If we take a shot glass of ‘magic juice’, we can add two pieces instead of one (Page House does not encourage drinking). The other members of your team are allowed to pick weapons (foam noodles, water guns) and assault the current racer of the enemy team (or anyone really). First team to connect four wins. On your marks, get set, go! 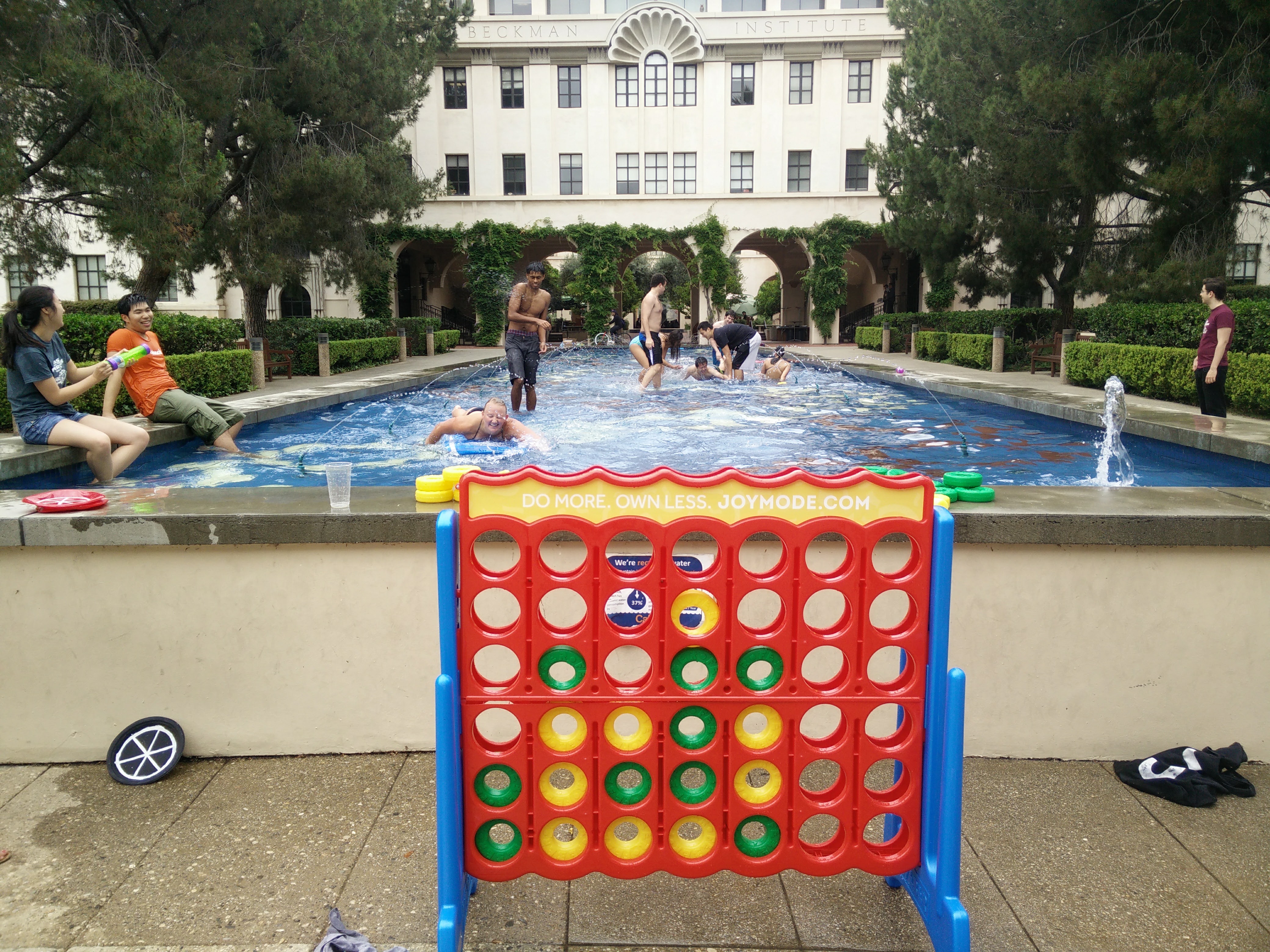 Team Letty (my team) took this one home this time, mostly because we had more people who were willing to imbibe magic juice. We got a whole turn behind in the relay, but being able to put in two pieces at a time is a huge advantage.

From here, we were handed the next clue and allowed to go back to the dorms to shower and change into dry clothing.

Once we had all washed up, we reassembled and cracked open the clue:

This one proved to be the easiest of all. After looking at it for a minute or two, Avikar went ‘Oh!’, and wrote down ‘BROWNGYM’. The digits corresponded to typing on a phone keyboard, so 22 means hitting the 2 key twice, which on the old phone keyboards got you the letter ‘B’. Three sevens is an ‘R’, etc. So back to the gym.

We arrive and are informed that we are tied with another team, and need to compete in a tie breaker, either giant beer pong or giant jenga. We select giant beer pong, and half our team goes to play the beer pong while the other half works on the new clue we are handed. 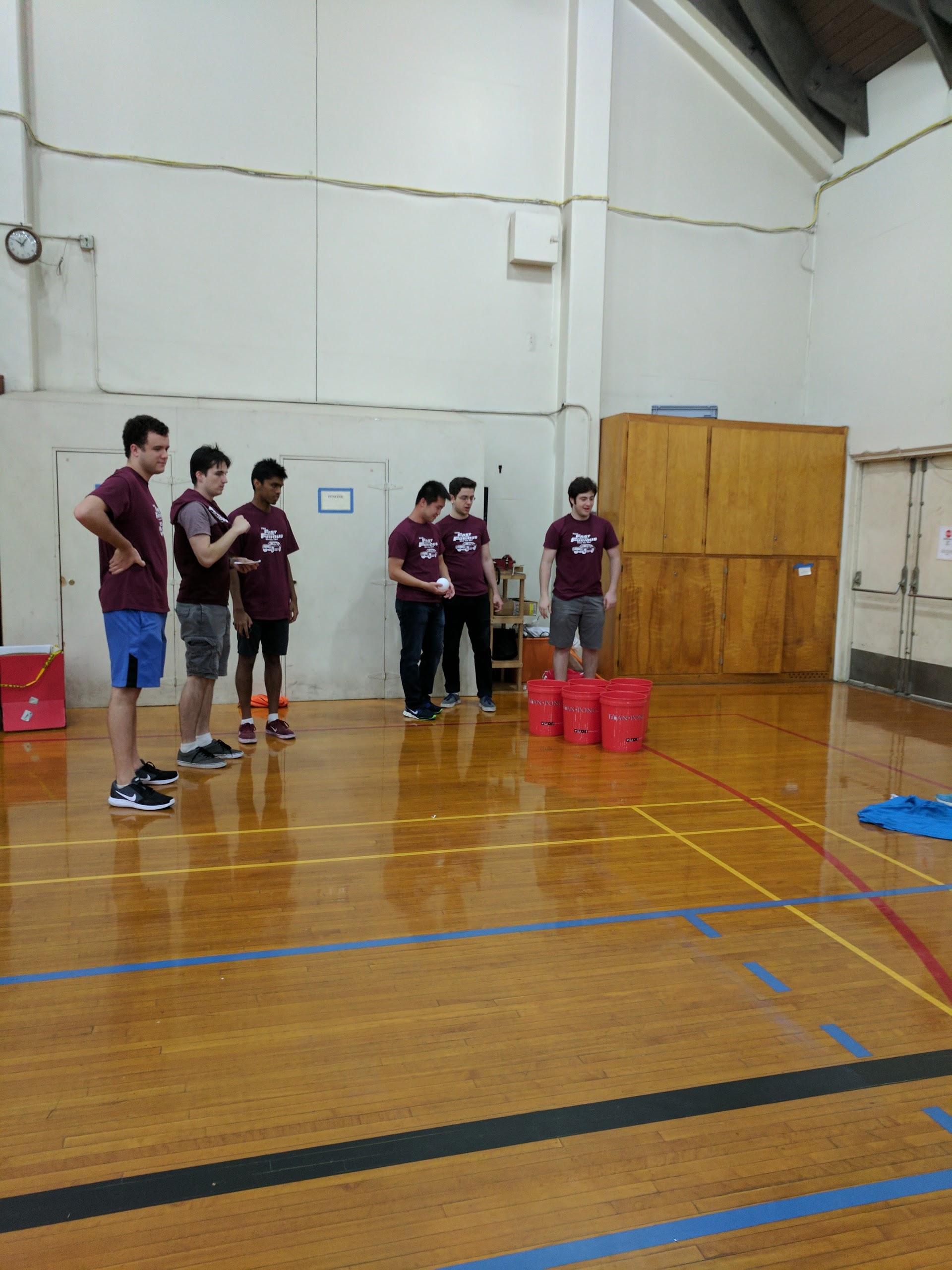 We had a hard time with this one. We puzzled at it for a while, during which our teammates lost giant beer pong. 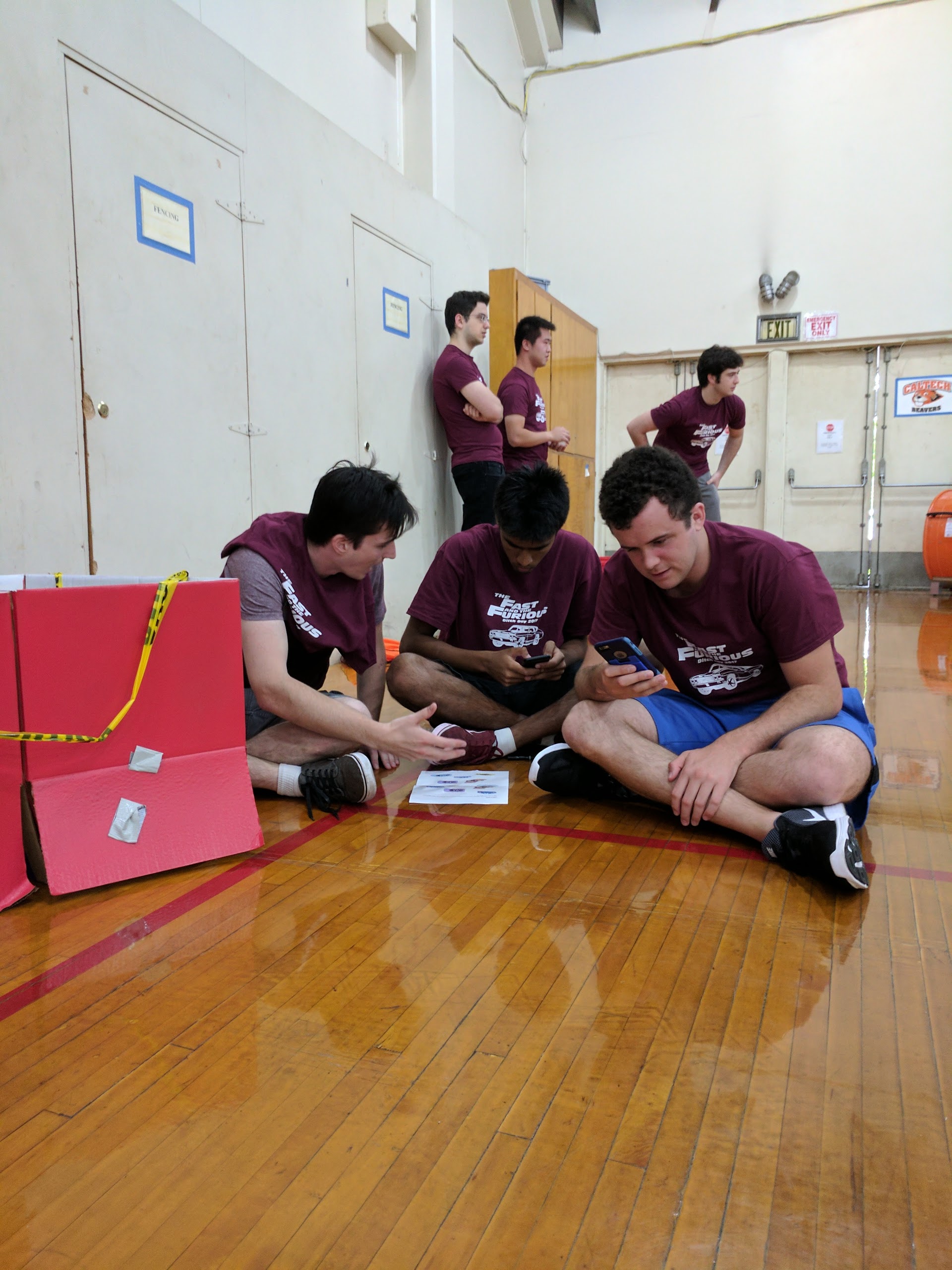 Eventually, a senior came over and told us that a hint was ‘ish’. After that, things quickly fell into place.

The following prefixes create words when ‘ish’ is added to them:

Leaving the following prefixes that don’t:

The Caltech students looked at these for a second, and realized that they could be rearranged to make BRAUNPARKING, which meant the Braun Gym parking lot. Off we went!

Upon arriving we saw this: 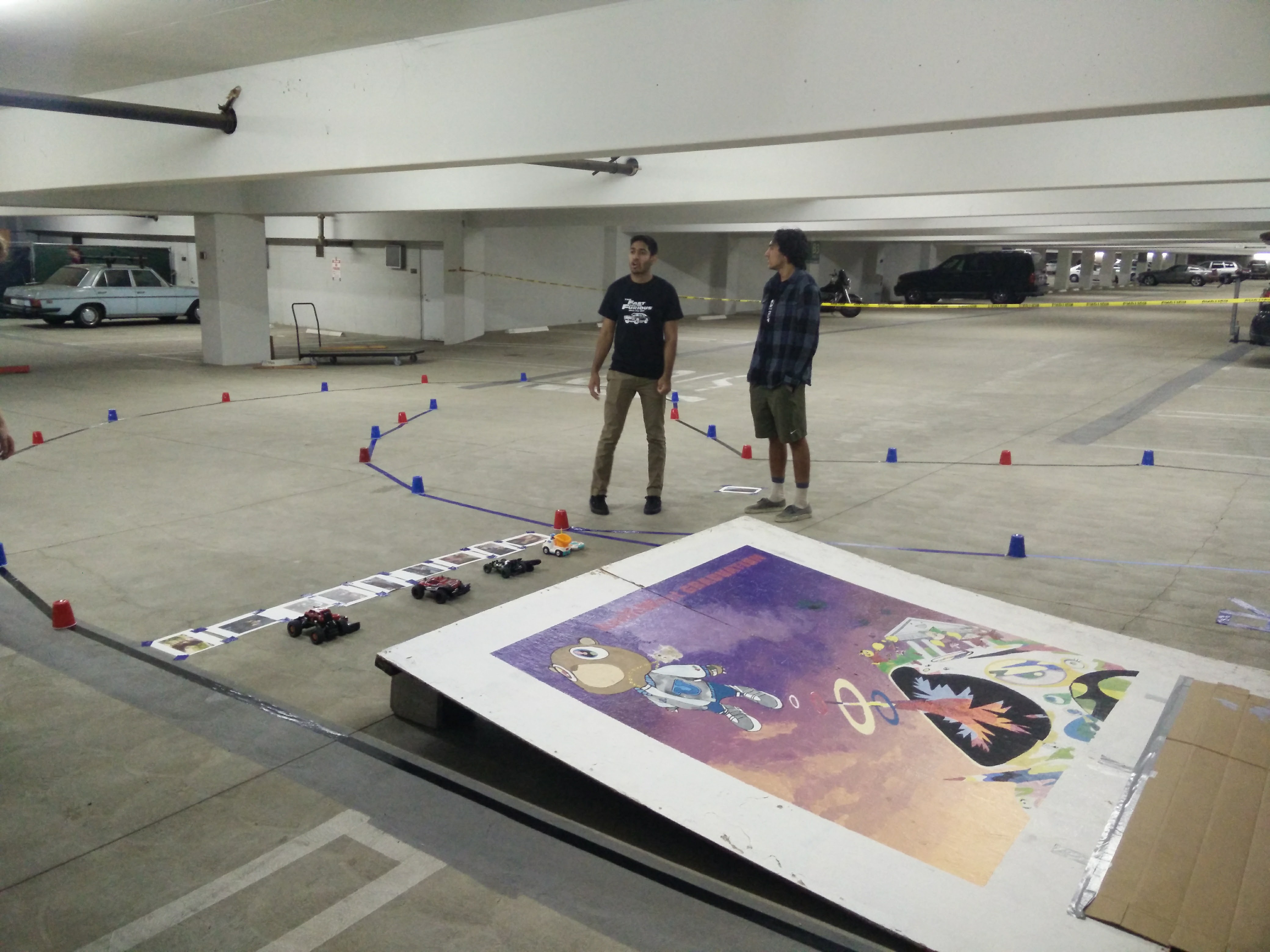 Four electric car toys all lines up on a sweet racetrack complete with a ramp. Four cars, four teams… We knew what this meant. The race was on!

Actually first we had to pick the cars. Teams got to pick in order of their position - we were second so we chose the second best car. The last team got a little toy dump truck clearly meant for toddlers, which was both hilarious, and guaranteed that they had already lost. The competition was narrowed to the remaining three teams. It worked like this: one team member took the remote and stood in a middle section that wasn’t a part of the track. They drove the car around an entire lap, at which point they handed the remote to the next member of the team, who repeated the process. The team to do the most laps in a half hour wins. Oh, and you could take a shot glass of ‘magic juice’ to score your team an extra lap (Page House does not encourage drinking). 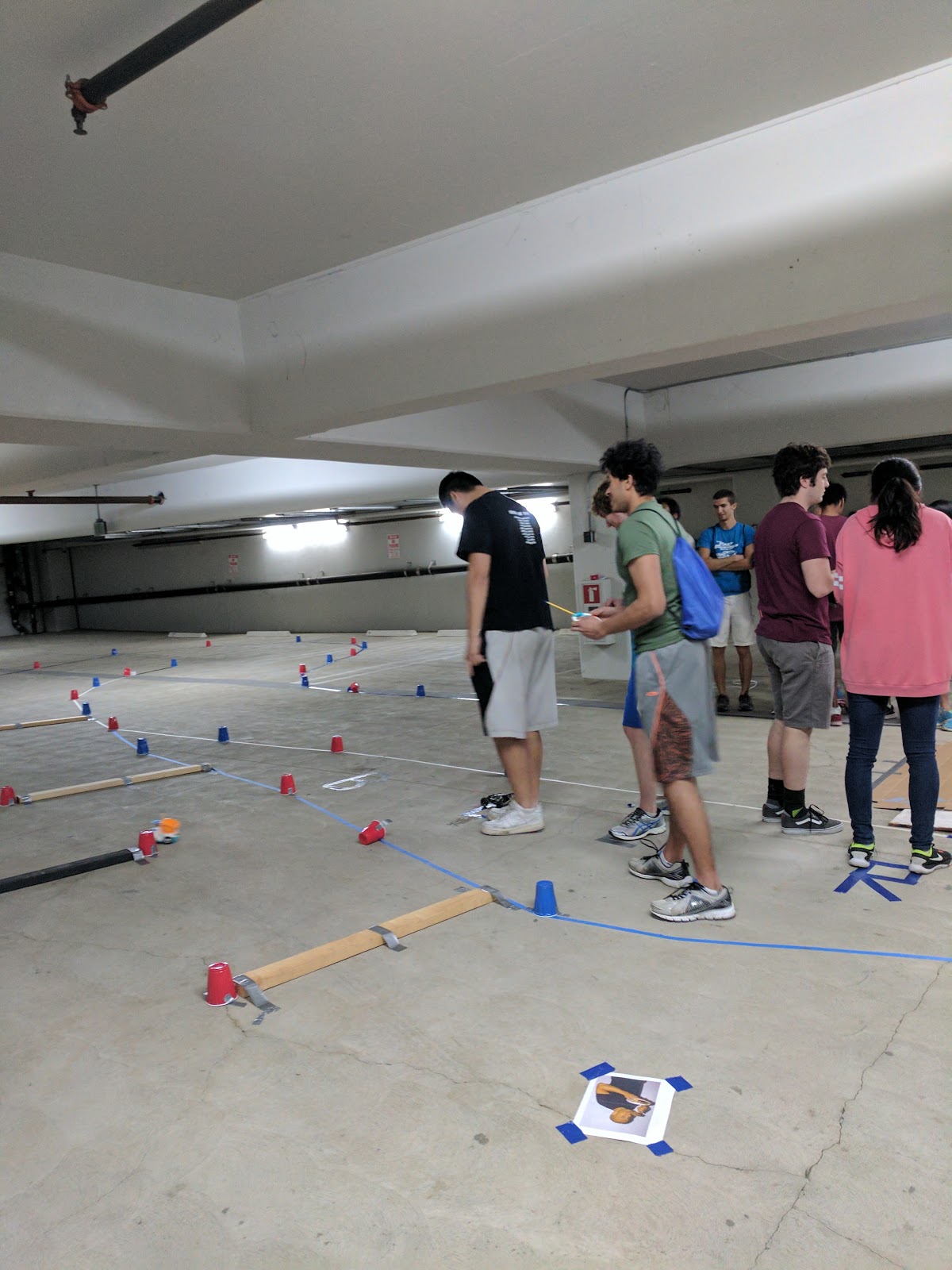 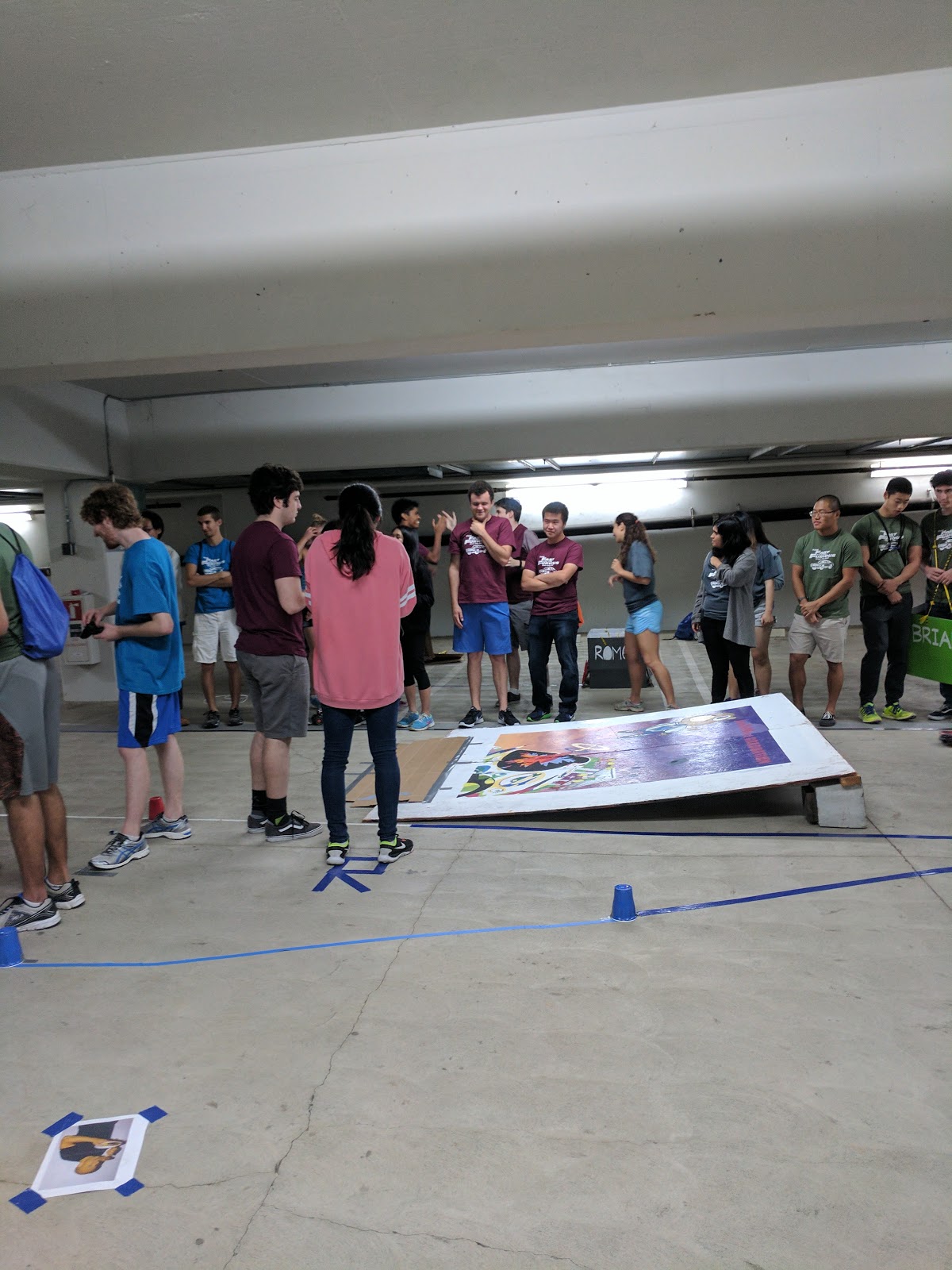 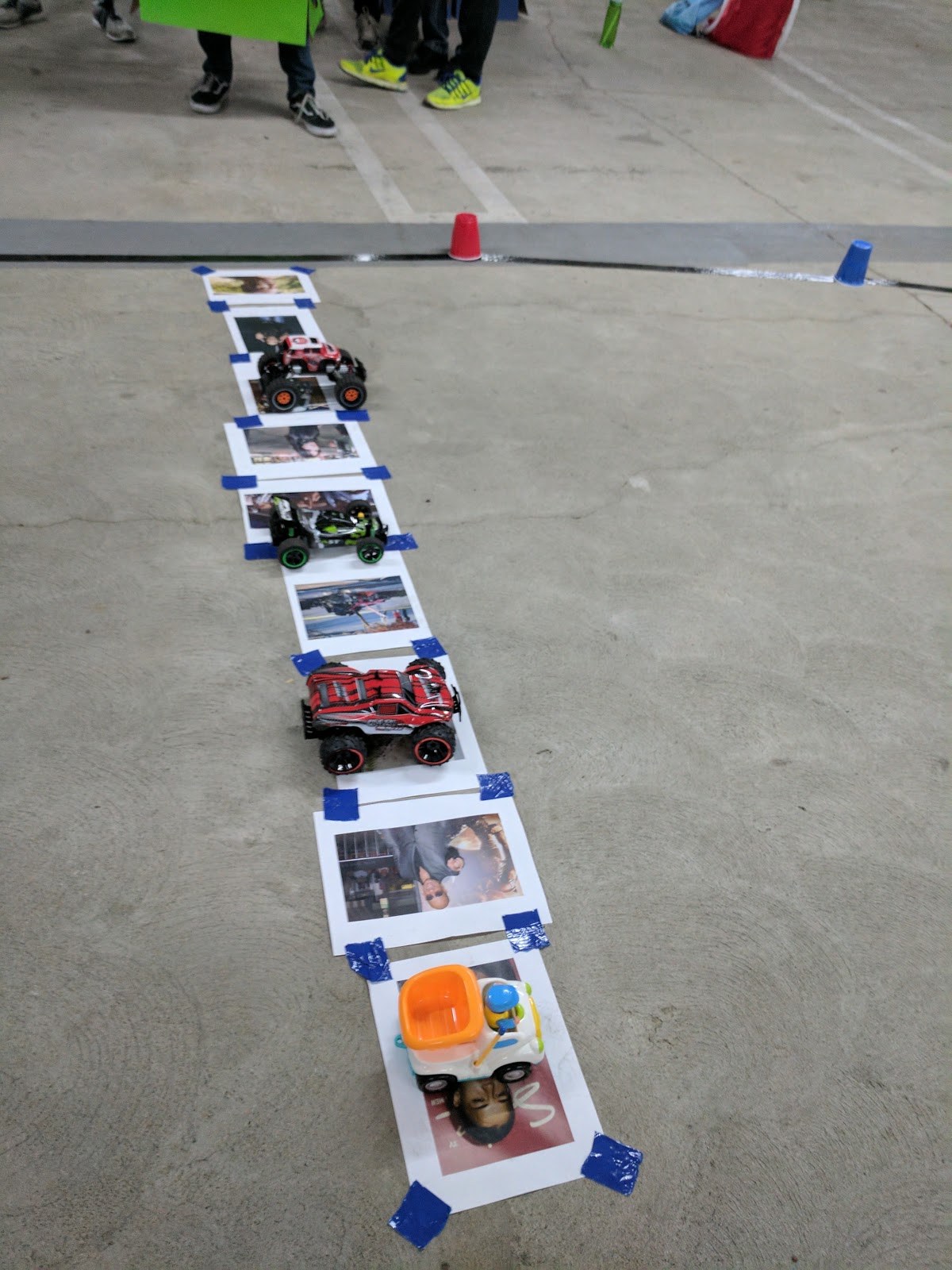 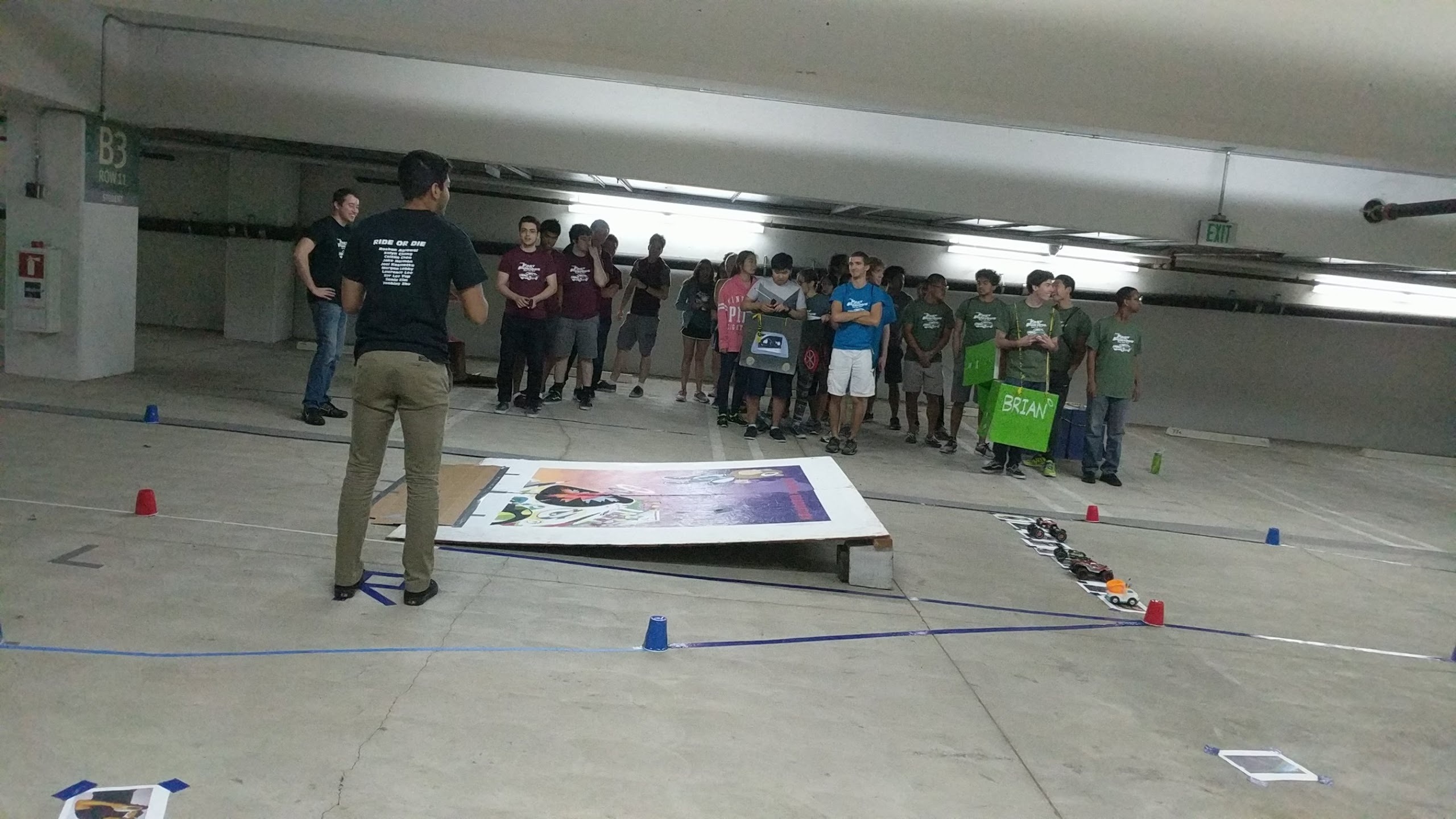 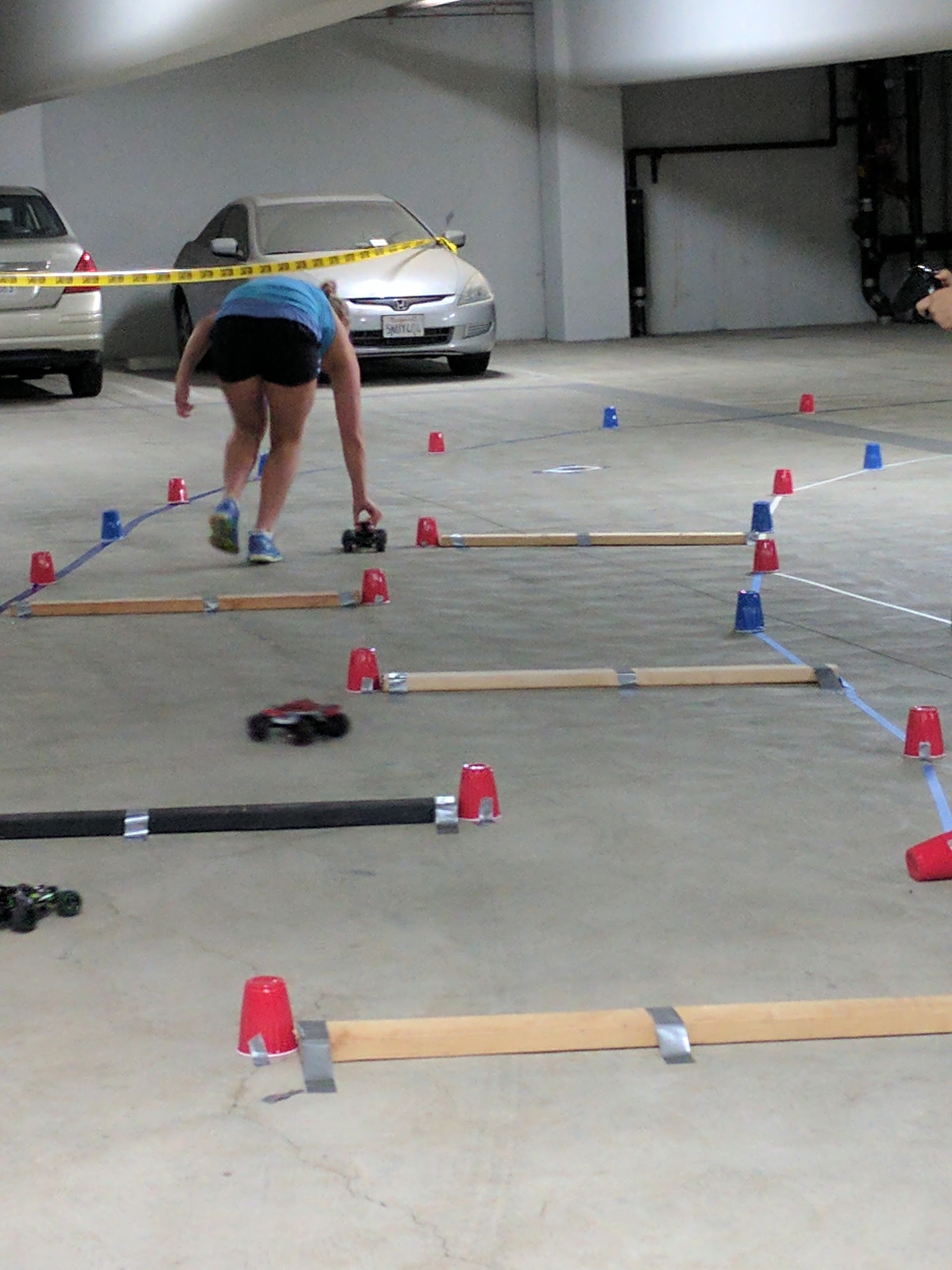 We didn’t win 😞 The car we chose had really poor battery life, so it died in the middle of the race. The seniors had brought extra batteries in case that happened, but even after changing them out the car kept failing. I drank all that ‘magic juice’ for nothing. But it was definitely a ton of fun, especially to watch the little dump truck fail miserably.

That was around 12:30, so we headed over to the specially made lunch of barbecue and mac n’ cheese. After finishing that up we were told to meet in the Page House courtyard, where we were shuttled to an all inclusive four hours of go-karts, arcade games, and mini golf. We ended the day by getting some ramen (this was the only thing not provided by the seniors), and heading back home. I can’t wait to see what my friend Avikar comes up with next year 😄